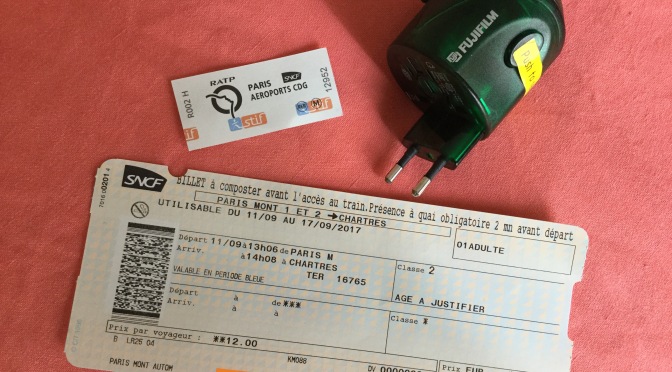 Thus I have begun my butchering of the lilting French language, here, live, in person. I think I told the buskers on the train that I didn’t have any money when they came by with the cup; I think I thanked people properly and said ‘you’re welcome’ politely. However, when I asked the clerk at the boulangerie if I could use my credit card to buy du pain (having temporarily misplaced my debt card and therefore unable to get euros) I forgot to turn my ears on to high speed to match the rapid fire modern pronunciation, so I had no idea what she said. At any rate, one of the the coolest things about France is that French is widely spoken here. Also, one of the things I love best when traveling happened already at the Montparnasse train station: a real French person walked up to me and started asking me questions about the train in real French. She thought I was French! This pleases me so much.

Another fun thing is I had to walk a mile and a half from the train station to the B&B, and each time I asked someone to help with directions, I got that exasperated French lip flapping, cheek puffing response that is so endearing. (Most people didn’t know the road.) Here! Live! In person! Sacre bleu! (And no, that’s not sacred blue, spell check.)

Anyway, I’m here at the B&B in Chartres. I’m too tired to venture out anymore (after that long plane ride, it took hours of shuttles, trains and metros to get here), but tomorrow is another day.

The little patio I can see from the bed.

God, this bread was fantastic. Weirdly, the tomatoes tasted like fish.