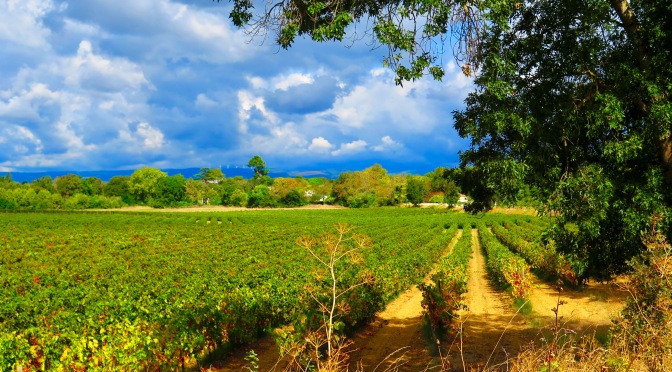 Today was my last chance to explore the Canal – I leave tomorrow for Arles. The B&B I’m staying in loans bikes, which is very convenient, but I had to make do with a one-size-fits-all bike that didn’t exactly work for my long legs (I will need the soothing benefits of the room’s giant bathtub later, I expect). My host told me the ride from the B&B to the Canal is about 35 minutes, but I took a personally devised short cut and got there in only one and a half hours. I am sure this is because a few days ago I was feeling superior about my navigational skills, and you know pride comes before the fall. Anyway, the day dawned beautifully instead of stormily, and I set off right after breakfast. Wow, what an adventure. The Canal is lovely and mostly unspoiled, and its engineering is impressive, to put it mildly, especially considering it was completed in 1681. One section I passed includes three separate locks to manage the elevation change. And at one section, A RIVER PASSES BENEATH THE CANAL. C’est fantastique! The tow paths are well used by walkers and cyclists, although there were many stretches when no one was in sight during my 22 km ride. The canal is no longer put to its original commercial use (having been made obsolete by trains and trucks) but is used extensively by large (and rentable) river boats, complete with kitchens and bedrooms and bikes on decks. The tow path is narrow, and it provided an opportunity in courage building for me: I’ve developed edge issues as I’ve aged, and when I was in the ‘lane’ next to the water’s edge, it was an opportunity for growth! I did crash, but only once, and I did not wind up in the canal. Nor did I take anyone else down with me, so I’d call that a success. Sadly the photos do not do the beauty of the Canal or its engineering feats justice.

Oh, that’s not a photo of the castle below; it is merely a landscape photo and the castle just happened to be there in the distance.

Lastly, here is a launderette update: the one in Carcassonne nearby B&B is new, modern, and spic ‘n’ span, but I still have not perfected the art of using a French laundromat; witness the locked machine sloshing around with no clothes in it . . . 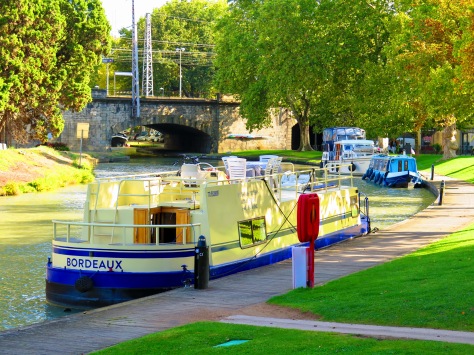