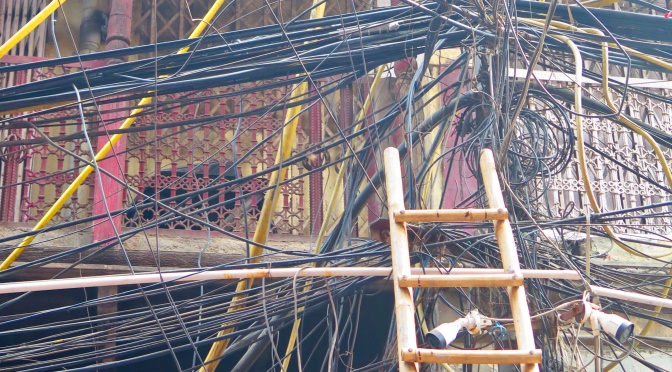 The day’s excursion began rather tamely with a visit to a massive government complex and the India Gate (not to be confused with the Gate of India). However, often there wasn’t much to see due to all the greyness, and the guide would explain, “If it weren’t for the fog, you could see the . . .” But the news told a different story: “Delhi’s Chief Minister Arvind Kejriwal has called the city a ‘gas chamber.’” Lets hope that’s just political extreme talk.

Anyway, things got considerably more adventurous after delving into Old Delhi’s Chandni Chowk and Shahjehanabad, sampling samosa and jalebi street food for lunch, on streets that were wildly crowded. It is impossible for me to fathom actually living in “real Delhi.” I hope the photos convey why I write that.

I also visited the Jama Masjid Mosque. But the highlight of the day was a trip inside the Sikh temple Gurdwara Sis Ganj Sahib and its community kitchen next door. One of my favorite ever travel experiences, except the part of being lectured at. But I’ve done my share of “lecturing to” so perhaps it is just payback time.

Here are lots of photos. Hope you enjoy them.